CLICK ON IMAGE FOR ADDITIONAL INFO
POST CARDS FROM THE SOUL
Tasha Smith Godínez performs works composed by both north and south American composers.
Postcards from the Soul communicates from the soul of the American classical musician and composer. 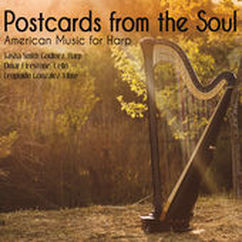 VILLAGE OF HOPE
Michael Byron and Cold Blue Music have released a new CD of gorgeous music for the solo harp, commissioned and performed by Tasha Smith Godinez. In the Village of Hope contains a single 22 minute track that unfolds with such delicacy and grace that an hour of it would not seem too much. The composer writes: “With a sound reminiscent of wind chimes, it yields fields of harmonic stasis, that mysterious circumstance of individual notes diverging and merging to form a delicate fabric of sound.

In the Village of Hope opens with a quiet serenity, full of sound, but gentle as a summer rainfall. The tempo picks up almost imperceptibly and we are soon awash in a lovely counterpoint that infuses the harmonies with a steady propulsive energy. The rhythm is constant, with a fluid feel that ebbs and flows in complex patterns that weave a tapestry of sound. There is no progression or sense of harmonic movement except when a key change occurs – and there are several of these – then a new set of tones takes up in the same manner as previously. The texture and density have an appealing consistency throughout. Towards the finish the tempo slows and the sound becomes quieter as the final notes slowly expire. Listening to this piece is like watching the sun slip slowly over the horizon as it illuminates the sky in ever-changing colors and shades.

This music is perfectly suited to the harp providing just the right timbre for the complexity and hopefulness that are combined in this piece. There is an exotic and idealistic feeling to In the Village of Hope  that is beautifully drawn out by the playing of Ms. Godinez, who negotiates the 22 minute shower of notes with assurance and perfect command of her instrument.

This is an impressive work, both in concept and performance – In the Village of Hope perfectly captures the optimism and tranquility that seems so elusive in our busy lives.

In the Village of Hope is available from Cold Blue Records (CB0043), Amazon and iTunes. 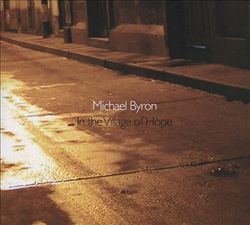